We arrived in Tokyo on Friday November 11, 2016 and upon checking into our hostel we inquired about attending the famous Tsukiji Fish Market Tuna Auction.  We were told the auction does not happen on Sundays, so that meant we had to get up early the next day to squeeze it in before our other plans.  We were advised to get there early, as in leaving the hostel at 3:00 a.m. should suffice. Saturday came and we departed the hostel at 3:15 a.m.  The walk to the market from our hostel was about thirty minutes or so, however we decided to take a cab. Our taxi driver let us off on the main street right where the market begins.  Thankfully we ran into a man that spoke English or at least understood what we were trying to communicate to him, because we had no clue where the entrance of the auction was located.  We arrived about 3:30 a.m. and as we approached the gate the guard immediately signaled to us that it was done, which meant they were no longer accepting visitors.

You can only imagine what our immediate response was.  Excuse me sir, but we woke up super early to be here, we traveled a long way, blah blah blah.  My words fell on deaf ears because he had no idea what I was saying and gave us the X sign with his arms.  In Japan, when you get the X sign made with the fingers or arms you know it’s a wrap.  We turn away and begin to walk back towards the location where we were originally dropped off by our taxi driver.  Instead of heading back to our hostel, we decided we would enjoy some fresh fish for breakfast.

Sunday came around and Melissa and I decided we would hang out in Tokyo for one more night.  One more night felt super exciting because that also meant that we could try our luck once again at the tuna auction, but this time we would get up at 2:00 a.m. and get there by 2:30 a.m.  Monday came around and we were back at it hailing a taxi around 2:15 a.m.  Unfortunately, because taxi drivers in Japan don’t speak any English we were let off a few feet away from the same spot the first taxi driver let us off on Saturday morning.

We walked up to the entrance and was thrilled to see where the line started and where it ended, we were probably #7 and #8 in line.  We had to wait in line for about thirty minutes before they let us into the building.   After thirty minutes we began moving into the building where we assumed we would see the auction, but not so it was just a holding zone for the next two hours or so.

While we waited, we noticed that the room was being split into two groups.  One group would go into the auction area at 5:00 a.m. and the other at 5:30 a.m.  We also noticed that the room wasn’t completely filled, which meant that visitors continued to enter until the second group left.  Note, if you plan on visiting on a Saturday get there at 2:00 a.m., it fills up quickly.  If you visit on a week day arriving around at 3:00 a.m. or so should be just fine.  While you are in the holding area you get the pleasure of receiving a brief history about the Tuna auction, from one of the bidders.

The time has come for our group to enter the auction area. We put on these bright colored safety vest, which were used to ensure the fork lift workers wouldn’t run us over while we were in transit, and also to identify what group we were a part of.  We arrived inside the auction room and found loads of frozen tuna strategically placed on the concrete. As we stood elbow to elbow in small rectangular area, we observed several buyers walking around surveying the inventory to see what they would bid on during the auction.  As a bidder, some of the things one would look for in the perfect tuna to sell to their clients is the richness of the color, the texture, whether or not it’s too oily or too fatty, etc.

The time is now 5:15 a.m. and the auction bell sounds.  Thank God for my selfie stick, because being able to capture the auctioneer during the auction makes this experience much more entertaining.   About five minutes passed and that was the end of the auction, our group was now being ushered out of the auction room and into the exit area.  I thought to myself, wow we were up at 2:00 a.m. only to wait for two and half hours just to see a five-minute auction show…Was it worth it you ask?  Yes, it was absolutely work it. It was a fun experience and after you’ve done it once you don’t ever have to do it again, unless of course you choose to.  It was also nice to have the opportunity to see it in this location, before the fish market is located to another district in Tokyo. 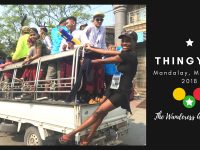 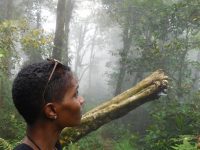 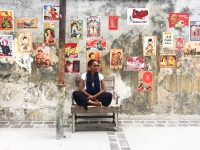